Frank Feist, Co-Founder & Co-CEO It was a relatively quiet morning for Mary Jo Wildey, director of assay operations at Merck until her drug discovery team came to her with an exciting revelation. A compound that historically had been relatively inactive suddenly showed activity in not only the primary but also the secondary screening process. Thanks in large part to the recent replacement of Merck’s tip-based plate washers with a novel technology—BlueWasher—from BlueCatBio. What this new system meant for Merck is that the growth-medium used to grow the cells was removed to a much lower and more consistent level allowing the imaging system to capture the activity of this compound. The elimination of background and residual volume in a way that’s ten times as effective as their conventional washers helped Merck unveil the status of a seemingly inactive compound in the library to be a truly active compound.

“The fear of missing out on the next billion-dollar blockbuster drug, due to a ‘false negative’—a compound that is really active but erroneously classified as inactive—is what keeps a screening engineer awake at night,” explains Frank Feist, Co-founder and Co-CEO of BlueCatBio, the company whose BlueWasher excels in delivering fewer false positives and false negatives by enhancing the quality of data obtained during the screen. Because high-throughput screening demands automated removal of liquids from plates as part of typical protocols, pharmacologists need to convert manual, ‘dump-and-tap’ protocols, into high-throughput methods. Before the BlueWasher, the only type of instrument conducive to automating liquid removal were tip-based plate washers which remove liquid by suction through aspiration needles. Tip-based washers, however, force to choose the lesser of two evils when determining the optimum position of the aspiration needle vs. the well bottom. If the needle is adjusted too low it may scratch the well bottom, disrupting the cell monolayer which impedes image analysis; if it is adjusted too high, a large amount of residual liquid is retained at the well bottom, which increases background and variability of assay data. Dr. Wolfgang Mann, Co-CEO of BlueCatBio explains how BlueWasher’s evacuation by centrifugation method reduces residual liquid volumes by 10x vs. tip-based washers, to between 0.1 to 0.3 μl, which simultaneously reduces assay background and variability and drives z’ improvements between 0.1 to 0.3 for a wide range of adherent cellular assays. It is this unique capability to improve z’ which allows bioinformaticians to lower their hit calling threshold—digging deeper into the pool of hits flagged by the screen—which directly translates to identifying more potentially active compounds while simultaneously reducing the number of false positive hits, saving time, cost, and effort involved in an elaborate secondary screening process.

This helps BlueCatBio’s customers to focus their drug discovery resources on their most promising compounds. “Better z’ allows bioinformaticians to provide more robust compound profiles to chemists and discover more active compounds, helping drug discovery scientists invest their time and money on their most promising compounds and pushing them for secondary screens,” notes Dr. Kerstin Hagen- Mann, Co-founder and CSO of BlueCatBio. BlueWasher’s profound results not only impact the work of bioinformaticians or chemists; the effect ripples back to a strategic level, driving better drug discovery performance and bottom line efficiency for pharmaceutical companies.

“Using centrifugation instead of aspiration to remove liquids from plates for media changes and washes in a non-contact fashion has a transformative potential,” says Mann. “When the plates are spun at speeds finely tuned to the level of adhesion of the cells within the BlueWasher’s compact cleaning chamber, the growth medium is ‘thrown out’ in a non-contact fashion similar to the manual process of dump-and-tap, evacuating the outward-facing wells.” BlueWasher is a contamination-free system, with easy-to-use self-cleaning functions. The resulting improvement in assay data quality far exceeds what could be achieved with significantly more costly investments, making the BlueWasher a cost-effective tool to improve assay data and drug discovery productivity.

Another major advantage of BlueWasher is how it enables miniaturization of assays from 384 well plate formats to 1536 well plate formats, which has become a primary objective for pharmaceutical companies due to cost and time pressures. The key advantage of the BlueWasher over conventional, aspiration based washers—the lower and more reproducible residual volumes—is even more striking in 1536 well plates because assay volumes are so much smaller—typically 8μl in a 1536 well plate vs. 80μl in a 384 well plate, so that a fixed amount of residual volume has an even higher impact on assay background, variability and ultimately z’.

This is the reason that in a study published by the Society for Lab Automation and Screening (SLAS), Sinead Knight, a senior scientist at AstraZeneca, describes the BlueWasher as “enabling 1536-Well High-Throughput Cell-Based Screening.” She describes the challenges when they were tasked to miniaturize their cell-based assays from a 384 to 1536 well plate format, in order to save cells, make screening faster, and to do so with lesser lab space. Initially using conventional washers, Sinead’s team was not able to reproduce the z’, obtained with their 384 well plates for 1536 well plates. With BlueWasher, Sinead was able to hit her historic z’ benchmarks from 384 well assays in 1536 well plates so they were able to successfully miniaturize their screens, reducing screening time fourfold and the number of cells required for a screen by 50 percent. Sinead also notes that, “a number of BlueWasher’s features facilitated integration into robotic systems, including small device footprint, accessibility of the plate nest by robot grippers, less than 30 seconds for complete plate emptying, and no requirement for either compressed air or vacuum lines to run.” 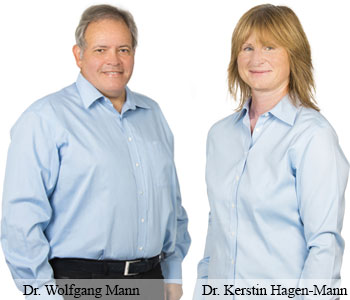 The value perceived by BlueCatBio’s customers has greatly contributed to the rapid growth of BlueWasher’s installed base: in less than three years, BlueCatBio has installed over 90 BlueWashers in 15 countries, with a customer base including 10 of the 15 largest pharmaceutical companies in the world. Feist highlights that about half of those installations are used by assay development scientists on a bench top as a standalone instrument, and the rest are fully integrated into highly automated screening environments. BlueCatBio has developed software controls that suit both purposes, offering a graphic user interface that has received a lot of commendation from the users for its intuitiveness. For example, since the BlueWasher is used with biological materials and growth medium, the risk for contamination and cell growth is high and effective cleaning of paramount importance. So BlueCatBio has developed highly effective self-cleaning methods, accessible by single touch from the user interface. Cleaning methods dispense proprietory, anti-bacterial, anti-fungal, and anti-viral cleaning agents named BlueDaily and BlueIntense into wash plates, spin them into the rotor drum where they reach all places accessible to contaminates. Ample flushing with DI water ensures the cleaning agents don’t harm subsequent screens. All regular dispense, evacuate and wash procedures are selected from easy to use pull-down menus. All methods use predefined protocols, where all physical parameters of the dispense or centrifugation (spinning speed, duration, direction, and acceleration) are locked down into the system. Depending on the adherence of cells to the well plates, and the extent of inhibition and background given by the growth medium, configurations are available to control the intensity of the evacuation procedure.

Discussing the novelty of BlueCatBio’s technology, Mann draws an analogy to LabCyte’s Echo instrument, which is widely used to dispense liquid in a non-contact way using acoustics. “BlueWasher is the ‘phase 2’ of that laboratory revolution, bringing contactless technology to the removal of growth media.” Ever since its inception, the company kept building on top of its centrifugation technology, adding facets like 1536w dispensing, a more powerful user interface, self-cleaning programs, passive waste draining and the BlueBench benchtop automation based on a six-axis collaborative robot. The company also supports magnetic bead assays and is now extending that capability to Next-Gen Sequencing (NGS), Polymerase Chain Reaction (PCR), and DNA extraction.

BlueWasher’s unique ability to improve z’ allows drug discovery scientists to do more with less: more active compounds correctly identified with fewer false positives to re-screen. This is achieved by eliminating assay background and variability at their source, which, to a large extent happens to be the media change and cell wash steps in cellular screens. “BlueWasher is a classic tale of enabling a quantum leap in system performance by ‘out of the box thinking’,” concludes Feist.
- Karthik Ramakrishnan
October 24, 2017 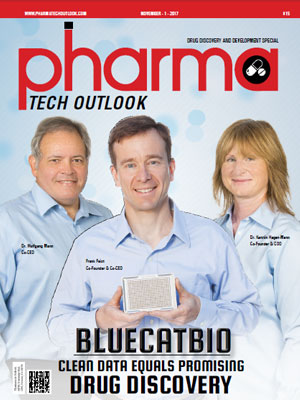