Disruption: The Evolving Ethos of Healthcare
×

Disruption: The Evolving Ethos of Healthcare 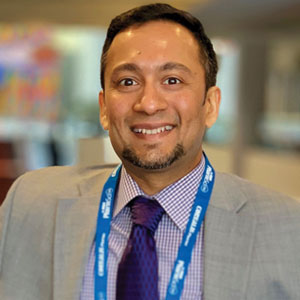 Disruption is defined as a sudden and unexpected change in an activity or process. In the context of Healthcare or technology, it can be interpreted as a sudden and emphatic change in the fundamental concept of operation resulting in an improvement or complete redefinition of a process or concept. Technological advancement has always been a tremendous catalyst for developments and transformative metamorphosis of the healthcare field.

From discovery of the Mandragora (root of the mandrake tree source of Atropine) by Theophrastus in the early 4th Century BC for the treatment of wounds, gout, and sleeplessness to the debunking of the DNA structure in 1953 by Watson and Crick; resulting in the redefinition of the field of molecular biology and laying the foundation for molecular genetics; to the theory of Special Relativity by Albert Einstein in the early 19th century; which still continues to guide the unfolding of the exploration of the universal realm as we know it.

In this context, it becomes imperative to delve deeper into the evolutionary aspects of innovation that have taken seed and how these groundbreaking ideas stand to transform the lives of patients and caregivers and the ethos of the healthcare field in the coming years. Scott Gottlieb, FDA Commissioner, speaking at Health Datapalooza conference Thursday in Washington noted “(Artificial Intelligence) AI holds enormous promise for the future of medicine. We’re actively developing a new regulatory framework to promote innovation in this space, and support the use of AI-based technologies.” 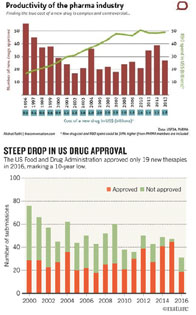 Innovation is at the very heart of the framework of pharmaceutical drug development, value chain, and ultimately access to the medications. Innovation is central to the different enablements within the pharmaceutical field whether it employs novel discovery methods for developing novel drug candidates that address ominous indications or whether it deploys advanced manufacturing processes that call for higher efficiency or whether it empowers healthcare providers to make access to cost-effective medications to patients possible.

Drug pricing and drug access have been a concern for the healthcare system for the last decade. This has been driven mostly by the upfront costs of drug development and the high rate of failure to commercialize. The last decade has seen a steady increase in the cost of approval of new drugs.

Conversely, the number of new drug approvals has taken a big hit driving up the drug prices. If we dive a little deeper into the causal factors for the drop in drug approvals, it can be attributed to focus on “blockbuster” products which are to a large extent still molecule centric, lack of product differentiation in the market, product life-cycle management too focused on incremental improvements rather than transformative change. Realizing the need to fundamentally change the business model for new drug development and commercialization, the industry has responded to this challenge and we see many examples of these disruptive changes taking effect. 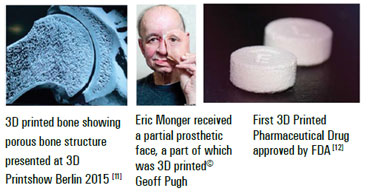 One of the most influential and transformative disrupters in the drug discovery area has been the discovery of CRISPR (Clustered Regularly Interspaced Short-Palindromic Units). Discovered by Francisco Mojica, a scientist at the University of Alicante in Spain in 1993, his hypothesis of CRISPR being an adaptive immune system was successfully adapted by Dr. Feng Zhang (MIT) in 2013 for genomic manipulation. Today, this technology is being used worldwide for studying the biology of malignant brain tumors in hope of ultimately creating a cure for cancer, developing next-generation antibiotic medications which are highly selective to infectious bacteria while leaving the good bacteria unharmed, and eliminating malaria by reconstructing the requisite genes in malaria-bearing mosquitoes that would render the mosquitoes resistant to malaria; which would in effect help to eliminate the source of malaria itself. 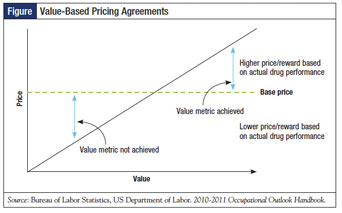 Another such disrupter is 3D printing [11]. Professor Ely Sachs of MIT was one of the first to come up with the term “3D printing”, which really is a modification of the now mundane inkjet printing. This novel manufacturing methodology allows for multiple materials to be “printed” (deposited) onto a surface as a free-standing robust structure corresponding to the design intended which can be relayed to the printer via a computer program for 3D models. Application of this technology to the healthcare industry has been truly disruptive enabling creation of “biomaterials” such as bones and skin which have been employed in various instances of replacement therapies. Likewise, one of the very first 3D printed drugs have been approved by the FDA and launched [12].

On the value-chain front, one of the major disrupters has been the concept of Value-Based-Pricing (VBP). One of the most accurate definitions of VBP has been offered by Rice University’s Professor–Dr. Utpal Dholakia which he states as “Value-based pricing is the method of setting a price by which a company calculates and tries to earn the differentiated worth of its product for a particular customer segment when compared to its competitor.” While the applications of this concept are certainly not limited to any one field, its employment in the pharmaceutical field has been more recent. Contrary to the traditional model of setting the price of a drug product in the market with the primary motive of profitability, the VBP concept focuses on “value to customer/patient” through which the reward is concomitant with the actual performance of the drug or its value to the patient. Several major pharmaceutical companies have signed value-based contracts with major payers for cholesterol-lowering drugs as well as drugs for diabetes. This presents a win-win scenario for both patients, who directly stand to gain from the drug performance, and also for the pharmaceutical companies, who enabled by cutting-edge technology can develop value-added treatments for the patients and be compensated in proportion to the performance of their drug in the respective patient population. 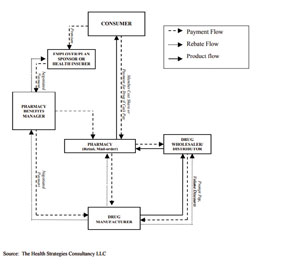 The current supply chain for pharmaceutical drug distribution is fairly convoluted. Owing to the recent consolidations of several players within this supply chain which include the payers as well as the distribution chains, the downstream pressure on the manufacturer increased to offer more competitive pricing. This has led to several drug shortages as manufacturers find it no longer tenable to sustain a particular drug supply to the market.

This scenario has created a scene ripe for outside players to disrupt the pharmaceutical healthcare provider industry. Several retail giants have stepped into the healthcare industry by acquiring wholesale pharmaceutical distribution licenses across the United States. This trend will see a major shift in the current pharmaceutical supply chain paradigm easing the pressure on the manufacturers from a pricing perspective and also enabling uninterrupted access to critical medications to the patients.

The ethos of the healthcare industry is one that is rich with the intent to provide a better quality of life through improved health care options, eliminating ominous diseases, easing access to medications, and providing innovative solutions to everyday health issues. Woven intricately into the fabric of the ethos of the healthcare industry, one can say that disruption is the one continuous revolution that keeps true the spirit of evolution.

Five Reasons Not to Move to the Cloud

AI Can Improve Patient Outcomes, but will Pharma Get there Quickly Enough? 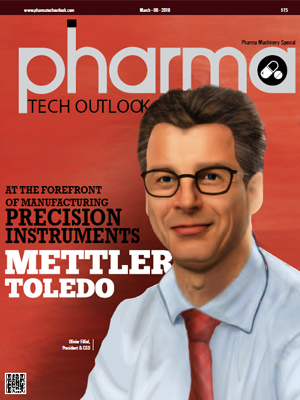